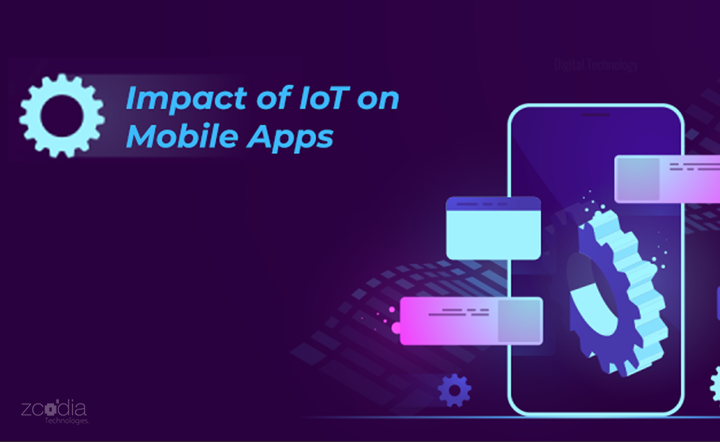 Internet of Things is one of the most impressive and valuable technologies for modern business globally. It can drive any company toward success by enabling the management to improve services and enhance the customer’s experience. In recent years, IoT mobile app development services have taken the customer’s experience to the next level. Let’s find out how IoT technology impacts mobile app development services.

It is fair to mention that as compared to other futuristic technologies like AI and VR/AR, IoT technology has a wider impact on mobile app development. Entrepreneurs opt for IoT app solutions to manage and control their existing IoT networks using their fingertips. The IoT network fetches information from the connected devices and transmits the real-time data to the mobile apps. As a result, the IoT app users can make informed decisions and manage critical processes using their fingertips.

A few years back, however, mobile app developers couldn't adapt to this trend because IoT was in a nascent stage and its scope in the mobile app development domain was not clear. This situation is completely changed now as we can see advanced IoT apps with a seamless performance and user-friendly features with enhanced control over the IoT network. Various industry sectors have started leveraging the benefits of an IoT network. Here we mention some major aspects of mobile app development on which IoT impacts a lot.

IoT concept makes your business app ready for the future. You can promptly increase or decrease the number of connected devices in line with changing requirements at the workplace, and similarly, you can integrate or delete the devices from the app. When you hire mobile app developers, they make sure that the app remains flexible and scalable enough to meet your IoT network-related requirements.

In the future, we cannot rule out the possibility that apps without IoT functionality may go out of the competition. In other words, IoT compatibility will become a need for the enterprise-grade mobile app in the future.

Though IoT gains popularity swiftly, it is still a niche point in the corporate world. In other words, IoT mobile app development services aim at serving the niche market. IoT-based apps are unique and require a lot of knowledge of the IoT concept. A top mobile app development company that has an in-house team of specialized developers. Also, this is a competitive market and IoT requirements keep on changing with time. Therefore, it is necessary for app developers to stay updated with every advancement of a thriving IoT domain.

IoT technology fetches data from connected devices. Such data can be in a structured or unstructured form. User behavior, transaction details, and other confidential information can be present in the data. Therefore, the IoT mobile app needs to be secure enough and capable of protecting sensitive and personal data while offering safe access to relevant data for app users.

Mobile apps remain the soft target for hackers or cybercriminals. In such a scenario, developers need to add security-related features in the IoT app solution. Even a slight lapse in data security can cause your company a lot of damage in the form of money and reputation loss.

Unlike traditional mobile apps, IoT-enabled apps need more attention during the development process. Developers need to integrate IoT-related features into the app without hampering its user-friendliness and visual appeal. Also, the advancement of IoT technology and changing business requirements or IoT network-related requirements also play a vital role in developing and maintaining the IoT mobile app. Here, the core focus of developers remains on making the app ready to integrate more devices and sensors.

IoT-enabled apps are aimed to increase convenience and bring automation in the IoT-based business processes. Also, the app should be flexible enough to add or delete the connected devices to meet changing requirements. IoT feature integration also makes the app more user-friendly. Such mobile apps can increase the efficiency of the users, and you can get the benefits of increased productivity.

This is one of the biggest benefits of the IoT concept. IoT can boost the brand, bringing automation, and reduce the overheads to enable the company to get a higher ROI. Similarly, the mobile app development company also works on making an innovative and interactive app with IoT features to attract more users. It reflects in overall cost-effectiveness of the app and you get more engagement.

Here we can mention one point- IoT technology is still evolving and integration of any of its advanced features can increase the mobile app development cost significantly, but then its benefits and importance can give a better return over a long period.

There is no exaggeration in mentioning that early users of IoT-powered apps will get a competitive edge over peers who are yet to bring such apps. IoT technology is capable of changing the shape of mobile app development and benefits industries.

IoT application development company offers end-to-end IT & app solutions using IoT functionality. It can simplify the processes and make the business operations easy. But, IoT has a great impact on the application development process and its advancements keep the developers on their toes. You can hire mobile app developers with sufficient knowledge of the IoT concept to get a seamlessly-performing IoT app that can take your business to the next level.

As an emerging IoT Application Development Company in USA, we provide the best mobile app solutions to leverage the benefits of the existing IoT system at your workplace. Our experienced app developers build robust mobile apps to meet complex business needs and increasing competition.